“Arcadia shows the burgeoning talent of yet another emerging female choreographer, Ruth Brill… She is certainly on the rise.”

“Brill is establishing a career as a choreographer. Peter and the Wolf shows a sharp eye for movement and storytelling.”

“Brill's Peter and the Wolf is a gem of a dance – it's funny and packed full of character and yet still ensures a great deal of technical skill from its cast.” 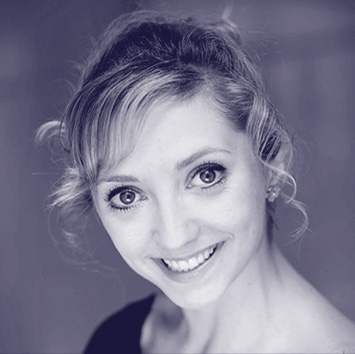 My passion for choreography is fired by two elements, music and narrative. For me music is the driving force and inspiration for movement. Musicality and versatility have always been hugely important to me as a dancer, and I seek to express this in my choreography. Storytelling and characterisation feed my imagination. When I create a piece, I strive to weave these strands together into a coherent whole. I aspire to make a strong connection with the audience to communicate, create a mood, move and entertain.

I am fortunate that my career has given me the opportunity to work with individual dancers, small groups and a whole company. Through the process of creating new pieces, I have also worked with talented composers, musicians, designers, lighting and costume-makers. My own vision has been enriched by the contributions of these other professionals. Keeping an open mind, listening, but maintaining my integrity, has been crucial in my growth as a creative artist.

Most of all, I find that the most incredible thing about choreography is that, starting from nothing, something new is created, which lives in performance and communicates with an audience.

As a child, there was always music at home. My childhood was spent watching musicals with my mum, selecting music with my dad and then creating full shows at home. My dad is a sound engineer and radio presenter and there is a family tradition in film and theatre. Born in Kent, I trained locally in the Cecchetti method. I went to main stream school and gained wide experience in acting and musical theatre. I enjoyed working with different choreographers, in different styles in various youth ballet companies. This fuelled my passion for story-telling in live theatre. I trained in a broad range of dance styles and drama, alongside the core of classical training, at Tring Park School for the Performing Arts. On graduation, I won the Choreographic Cup. Although performance had always been my first motivation, perhaps this was an indication of my future direction. I continued at English National Ballet School and graduated into the company.

After five years, I moved to Birmingham Royal Ballet, attracted by their broader repertoire, with its mix of ‘masterworks’ and the opportunity to work with David Bintley, a choreographer himself. I took advantage of the chance to develop through the in-house choreography workshops and was then given my first chance to create for the company in 2013. I was promoted to First Artist in 2014. My formal commissions for BRB include Rhapsody in Blue (2014), Matryoshka (2015), Arcadia (2017) and Peter and The Wolf (2019).

I have also choreographed bespoke work for the Future Dreams Charity Gala at the London Palladium (2018), community Flashmobs for Birmingham Weekender in the Birmingham Bullring (2015, 2017), Box 9 Drummers (2019) and The Rugby World Cup Welcoming Ceremony for England (2015).

I have been interviewed on BBC News, BBC Radio WM and BBC Radio 3 ‘In Tune’. My television work includes ‘An American In Paris’ at the Royal Variety Performance, the Peace One Day Concert at the O2, the Concert for Diana at Wembley Stadium and the Cecchetti Legacy Project at the Royal Opera House. I have a strong interest in outreach work and has delivered development programmes, including across the UK, France and the USA.

I retired from dancing in summer 2019 to take up the role as Artistic Director of London Children’s Ballet and pursue my freelance choreographic career.

‘MOMENTA’ for @englishnationalballet One of t

This error message is only visible to WordPress admins

There has been a problem with your Instagram Feed.